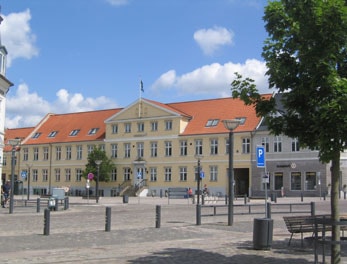 Built in 1806 and it is the oldest secular building in Ringsted. Above the stately entrance a royal monogram is seen.

Originally, the building belonged to the merchant and grocery Peder Hansen Freiesleben, hence the name Freiesleben, but in 1826 Ringsted took over the old post office in Sct. Bendt's Street to turn it into the town hall. Freiesleben’s gård now became the new post office. Here travellers on their way through town could have something to eat and a rest before taking up the journey again.

Later on Postgården was turned into an ordinary hotel and restaurant, but in 1985 these functions stopped.

Postgården was taken over by Nordea Bank and is now an administrative building for the Bank.